​OH SH*T! - Elsa van Damke
​
OH SH*T! follows 27 y/o Maggie on a date at her crush’s apartment. When she suddenly gets her period, she rushes to the bathroom — where she finds herself confronted with a monster that’s been living in her head for far too long.

Elsa (Elisabeth) was born in Berlin in 1994. From an early age she knew her passion lies in theatre and story telling. After studying Journalism and Public Relations for 2 years, she tasted blood whilst working on her first short film. Briefly after, she started at Beuth University of Applied Sciences where she studies Audiovisual Media And Filmmaking with focus on directing. Within the scope of her courses she realized different projects such as corporate videos, documentaries, music videos and short films. Now, after a 4-month internship at the world-famous Studio Babelsberg, she is about to (finally) graduate. In addition to that she works as a freelance photographer and as an assistant to casting director Lisa Stutzky („Back for Good“ 2017, “Systemcrasher" 2019, „How to sell drugs online (fast) Season 2, 2020). In October 2020 she's gonna move to Hamburg to start her Master's degree in directing at the Hamburg Media School.
In 2018 she started to advocate for feminism and menstruation, to visit relevant workshops and to inform about racism, politics, sustainability, intersectionality and the body positivity movement on social media.
@elsavandamke
@ohshtfilm

A group of bored roommates are drawn towards a wild acid house party across the street. The lines between peer pressure and cautionary advice keep getting blurrier with every shot of tequila.

Liesbeth Eeckman (BE, 1991) is an animation filmmaker living and working in Ghent, Belgium. She graduated from KASK in 2016 with a master’s degree in Animation. She previously studied graphic arts at the same school, the influence of which can still be seen in the diverse graphic styles and techniques in her films. Liesbeth’s work shows a strong interest in natural sciences, especially animal behaviorism.

Joel Rabijns (BE, 1986) writes and directs narrative fiction films, live-action as well as animation. Having worked for the in-house production studio of one of Belgium’s oldest universities has allowed him to explore animation in the context of science-themed graphic design. This influence can be seen in most of his personal and commissioned projects (albeit often in the form of Cronenberg inspired body-horror). 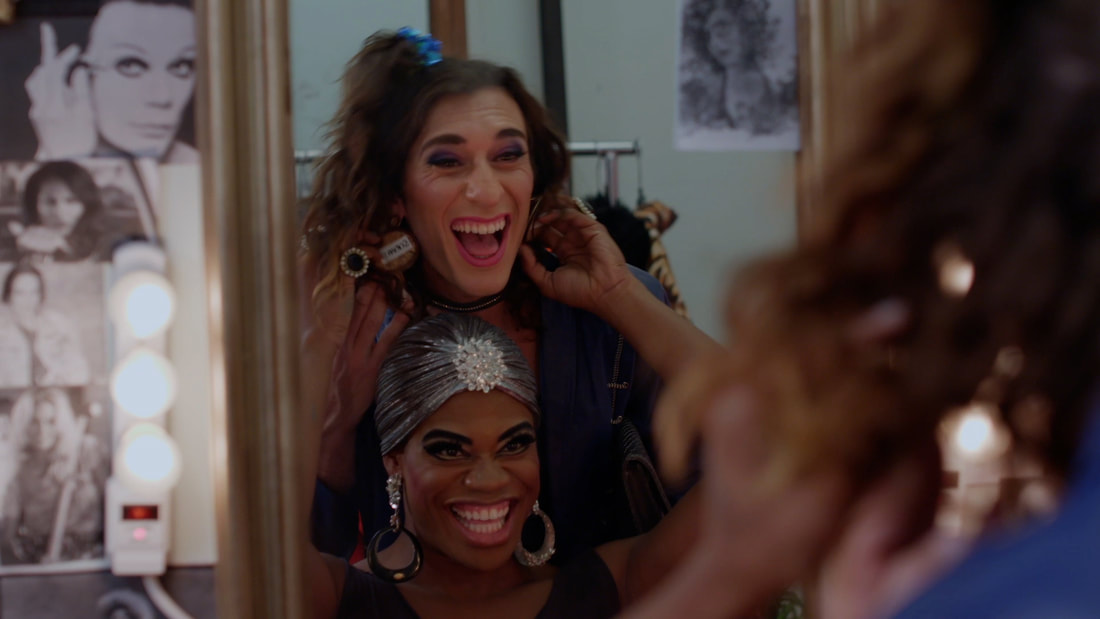 A fabulous drag queen must disentangle from an unhealthy relationship, while a young, non-binary couple attempt nonmonogamy. Can the magic of a queer dance party bring the lovers together and the transformative power of drag set this queen free?

Flourish features a brilliant cast with an array of intersectional identities, including Black, Asian, and Latinx leads who are trans, nonbinary, and queer, as well as immigrant and disabled. Our out, queer actors have been featured on Broad City, Empire, Shameless, Ramy, and have worked with Ryan Murphy, Lucy Liu, and Kal Penn; Justin Sams (Marvel's Cloak & Dagger), Poppy Liu (NBC's Sunnyside), Becca Blackwell (High Maintenance), Morgan Sullivan (Dirty, Sundance 2020), and Ryan J. Haddad who plays the beloved recurring role of “Andrew” in The Politician.

Her company, FemmePower Productions, commits to intersectional representation on screen and behind the scenes - centering queer, BIPOC, trans, non-binary, immigrant, body positive, and disabled artists/professionals. She launched the free streaming platform, FemmePowerTV -  queer content for quarantine - in May 2020, where you can watch her film, FLU$H, and a program of innovative and intersectional short films, docs, and series. FLU$H, premiered at Outfest Los Angeles (curated by Tribeca’s Lucy Mukherjee).

Mx. Ács is an intimacy coordinator (PLAN B, Hulu) and a consultant with REPS on Set for authentic representation of BDSM/kink and LGBTQIA+ communities. Mx. Ács is working-class raised, Appalachian, and mixed-race Anglo-Xicana.
@femmepowerproductions
@heather_acs

How we experience our role models is a subjective matter. But we all imitate, determine who’s not right for us and who could be. It’s a chaotic ride full of frustration and anger about the lack of diversity. In the end, we realize it was the search for ourselves all along.

„Tormento“ shows that the subjective emotions are mirroring what happens in society. It was the experiment to look at the lack of diversity from a different perspective. Emotional, fast, humorous, but also sensitive. The animation wants to emphasize the importance of diverse role models.

This all came together as a music video for Berlin based band Nunofyrbeeswax.

My name is Maren Sosada. I am a Nuremberg based animator and communication designer. In 2020 I graduated from Faculty of Design Würzburg, where I learned to combine my love for music and storytelling with my fascination with everything that’s funny and uncomfortable. After my exchange semester at Shih Chien University Taipei in 2018, I specialized in frame-by-frame animation. I’m always searching for new stories that long to be told in an uncommon way with the right amount of weirdness.
@sosada.maren
@nunofyrbesswax

We are cool, open and emancipated. We are the generation All Good. What’s an abuse, we all seem to know and of course, we condemn it. But what if the abuse is not so obvious and happens in the own relationships? Who is to blame for what? Who has to speak for whom?

ALL GOOD tells the story of a young woman that has to find herself in the chaos of shame, hurt and rising anger. A woman who’s been silenced and made unbelievable. A woman of a generation that cares more about it’s self-image than itself.

The Sound of Sinking Ships is a dance video that highlights movement itself as the figure flows through mediums, styles and levels of obfuscation and abstraction. This piece includes video, degraded 16mm and 8mm film and hand drawn animation.

Oona Taper is a Philadelphia-based visual artist and experimental animator. Her style captures both whimsical and chaotic energy, utilizing distorted yet recognizable figures, a strong use of sound, and a mixed media approach to address themes of intimacy, technology, physical space, and subjective
experiences. Taper's short films have been screened at national and international film festivals and her video installations and works on paper have been showcased in galleries in Boston, Philadelphia, and Rome. She helps run the video art collective Krissy Talking Pictures, which curates video and performance events in Philadelphia.
Oonataper.com
@oonataper

«Wrong Direction» is a short documentary about the band «Sliteneliten», and how six ladies gathered on a joint feminist and political project with the hope of being heard. The film was an exam film during the directors studies in artistic filmmaking at OsloMet - Oslo Metropolitan University in the spring of 2019, but was later expanded.

On a dark January evening in Oslo six young women decide to form a band. None of them know each other, but everyone knows Maria, a left-wing lesbian with shrill opinions.

They play flute, fiddle, guitars, drum and bass, and call themselves a ‘political telegram’. By spring, they have a warm friendship and high hopes for a career. Then real life knocks on the door.
​
Signe Rosenlund-Hauglid is a journalist and filmmaker from Viken county in Norway. She has previously made two short documentaries, and is currently developing her debut film with Stray Dog Productions in Oslo. Her films address topics dealing with feminism, LGBT-rights and political issues both in Norway and abroad.

A young brown girl awakens to reclaim her ancestral inheritance from Maharlika. A descendant of balyana (priestesses) - believed to have been fed to the crocodiles by Spanish colonizers who feared their unmatched prowess - she re-emerges from the shadows to lead her people into the reckoning for collective liberation.

SAMMAY (she/they/siya) is the daughter of Yolanda Peñaflor Dizon; granddaughter of Salvacion Orencillo Peñaflor and Carolina Agdeppa Dizon. Born from a collective dream where the ancestors danced, drummed, and sang around ceremonial fire in the mountain tops of the arkipelago - she is a choreographer, interdisciplinary artist, and cultural producer of Bikol, Kapampangan, and Ilokano descent who bridges the traditional and contemporary in centering embodied storytelling as a vehicle for collective healing and liberation. Through multimedia dance theatre, she invokes rituals for remembering and decolonizing - creating to honor the tapestry of indigenous epistemologies embedded in our urban landscapes. Raised on Tongva Land/LA County and a settler on Yelamu/San Francisco, her practice is rooted in the fundamental knowing that dance is the medium that connects the earth and ancestral realm - the passageway to transmute intergenerational trauma across cultural lines and geographical borders. SAMMAY is the Founding Artistic Director of URBAN x INDIGENOUS and was the first-ever Featured Artist for the United States of Asia America Festival 2018. To follow their journey through the diaspora: www.sammaydizon.com.

Directors’ Bio:
Adonis Emory and Guerrilla Davis are co- founders of We Are The Ones We've Been Waiting For (WATO), a collective of underground community-based artists working to liberate the creative spirits of The People. WATO works to liberate the creative spirits of The People and explore the impacts of genuine self-expression rooted in authenticity, love, and liberation. They co-create to build people power and promote cultural equity - reclaiming and radicalizingresources lost to poverty, racism, and social marginalization. Since the formation of WATO in December 2018, they have organized and hosted over 20 events - booking and collaborating extensively with over 100 QTBIPOC artists on a local and international level. As of August 2020, they have raised over $30,000 in emergency funds for community in need, provided creative support services to over 30 queer and trans creatives of color, and have been published in 16 popular publications with a nationwide audience including Afropunk, East Bay Express, KQED, HIV Plus Magazine, Advocate Magazine, and Billboard.com.
@sammaybabay
@shotbyguerrilla
@adon1stheone
@wearetheoneswevebeenwaitingfor

Go Easy On Me - Kyra Garéy

Kyra Garéy is a unique presence in the Berlin songwriter / psychedelic folk / rock underground scene. As the daughter of a German father and a Tartar mother, she was encouraged to play the piano, guitar and be active in Theater at a young age, sparking her passion for music and art.
This was followed by a Theater study in London (BA Honours at Southbank University), several invitations to jam sessions and concerts in renowned Moscow clubs such as B2, Bluebird, Bourbon, Roadhouse and the founding of her first band here in Berlin.
In addition, Kyra graduated from a media composer education and training as a sound engineer, that led to experimenting with electronic music.
With a saturating soulful blues, folk and rock sound she refines her skills day by night, creating a diverse repertoire of compositions.
Her songs are a journey through time, a road trip through the beauty of desolate highways on the search for meaning and love, through the vastness of the universe, through the mystique of the deserts, mountains and steppes where lost souls and spirits live but also the shamans linger.
An infinite story of self-discovery filled with passion, dreams, fragility, suffering, anger, desire, sexuality, love, consciousness, growth, joie de vivre and strength.

Steph is a predatory dater. She always insists on paying. When a large bill arrives, she’s nowhere to be seen, for Steph is a serial dine-and-dasher. Wearing elaborate guises, she believes she can slip away from the table and not suffer the consequences. But everyone has to pay the bill in the end.

Xuemeng Li and Katrin Larissa Kasper are first-time directors who met in London in 2019.

Xuemeng is a Chinese born, American raised, London-based director and actress. She is currently studying for her BA in Film Practice at the London College of Communication.

Katrin is a German actress and filmmaker. She studied theatre arts in Portland, Oregon, and moved to London in 2015 to pursue a career in acting. She’s currently working on her second film, a political short called ‘Kompromat’.